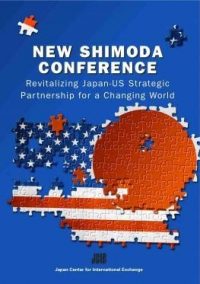 This conference report details the findings and recommendations of the participants of the New Shimoda Conference organized by JCIE in Tokyo on February 22, 2011, which convened US and Japanese parliamentarians and other senior leaders for high-level discussions on how to build momentum within each of their countries toward renewed bilateral partnership. The contents of this report came out of the lively discussions held during Shimoda Conference and include remarks by senior US and Japanese political leaders such as US Senator Jim Webb and US Representative Diana DeGette, former Japanese Deputy Chief Cabinet Secretary Motohisa Furukawa, and Foreign Minister Seiji Maehara, as well as papers by leading experts Charles Morrison, Gerald Curtis, and Hitoshi Tanaka.

Their findings include reflections on the evolvement of the US-Japan relationship since the first Shimoda Conference was held in 1967, as well as recommendations on what both Japan and the United States should be doing to ensure the kind of healthy and sustainable bilateral relationship needed to tackle the myriad challenges facing the region and the world.

II. Summary: The New Shimoda Conference—Summary of a Dialogue

Member, US House of Representatives

US-Japan Relations: Past, Present, and Future